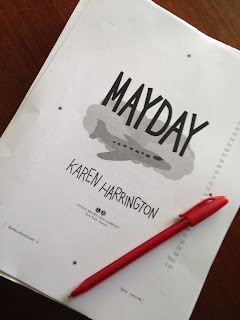 I am so excited because I just received the final proof pages for MAYDAY, out next May from Little, Brown Books for Young Readers. It's been about five or six weeks since I last read this book so I'm hoping it will be new and fresh during this final read. I love this story. It's about a young boy who struggles to find his voice - literally and metaphorically - after he's injured in a plane crash and cannot speak for weeks. The story illuminates his evolving relationship with his super patriotic military grandfather and his immature, unreliable father as he tries to find his own place in the world.

I'll share something interesting with you about this book. When I set out to write it, I thought I would use a piece of advice from author John Irving. Irving once said that he doesn't begin writing a book until he knows the last sentence of the story. Years ago when I read that piece of advice, I decided I'd try and do that one day. For Mayday, I did. I conceived of the final sentence before writing Chapter One. When my editor read my first draft of the story, she wrote to me that she was "obsessed with the last line!" (I hadn't shared my Irving experiment idea with her.) Now, that final line remains in the book. Of course, you're going to think I'm a big tease because I'm not going to share that line with you right now. :)

Have a terrific week!