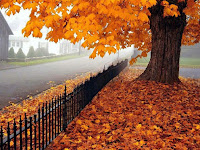 This week I start drafting a new work. I've had the idea rolling about my brain for some time. I bought five new spiral notebooks and have been making little notes and scenes for a couple of months. (Who can resist notebooks for .20 cents each?) I've been writing journal entries in the voice of the main character so I can get to know her better. And now, as fall is upon us, I get to dive into the story. I purposefully timed the start of this writing journey to coincide with fall. Fall has always energized me as no other season does. It's the start of school for many. It's the season for new lunchboxes, sweaters and school buses. It's the time of year when I want to try new recipes, buy autumn scented candles and pull out my favorite cashmere sweater. It's the season in which I went on a blind date with a man who would become my hubby. For me, fall has always been a good season to begin new adventures.

Now listen to Monty Python's funny take on starting a new novel. While my own drafting of a new work won't have this much commotion or audience, it's just as thrilling.

Posted by Karen Harrington at 8:13 AM

It's all about friendly conversation. Please leave your comments and thoughts!