Booking Through Thursday: A Writer's Companion

This week's Book Through Thursday questions involve pets. Ah, one of my favorite subjects.

Booking Through Thursday asks: Do you have any pet that has a name inspired by your readings?
No, I can't say it so.

If not, what would you pick if you DID?
I think Atticus would be great name for a loyal and true dog. And, a cat named Cosette (Les Miserable) would be cute.

Do any of your friends have book-based names for their pets? (Or their children?)
Yes! I have a friend whose son is named Atticus and a niece named Harper. My youngest daughter's middle name is Katherine, not because of a pet, but because so many of my favorite literary heroines are named Katherine.


Speaking of pets, every writer should have a good and faithful friend by her side. Here's my longtime writing companion, Abby. Not a literary inspired name, but a gentle moniker for a gentle pet. She's always close by, almost always under the writing desk. 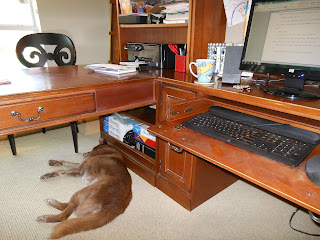 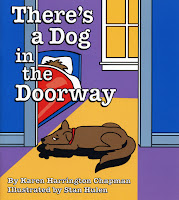 Maybe it's because early in her life, I wrote about her, hmm?
Posted by Karen Harrington at 9:33 AM

Email ThisBlogThis!Share to TwitterShare to FacebookShare to Pinterest
Labels: abby, booking through thursday

It's all about friendly conversation. Please leave your comments and thoughts!